What Makes a Good Songwriter? A legendary songwriter tells her story 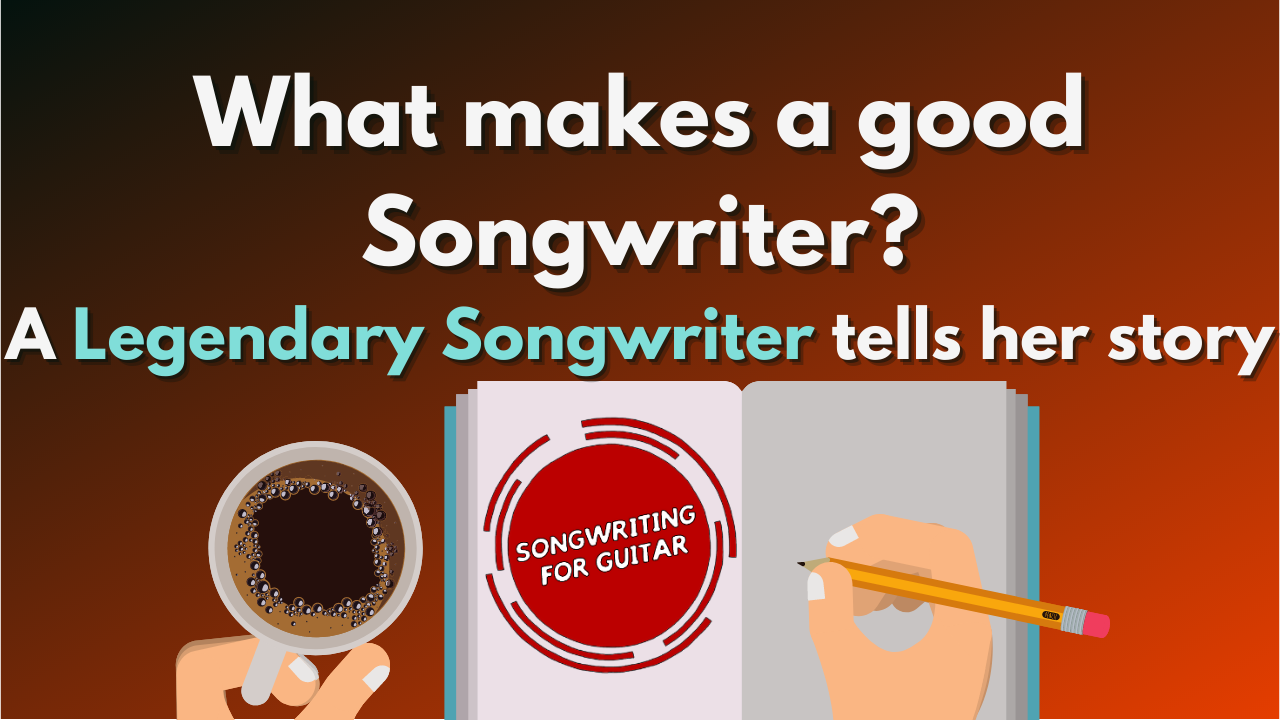 For two years Bonnie J. Baker was figuring out songwriting again after making multi-platinum hits! She’s had amazing singles cut with so many artists, that I could use this entire platform just to talk about that.  We talk about how she got started, and a period of time, later in life, where she was rediscovering songwriting. That process was so fascinating to me I had to talk to her about it. Listen to the full Songwriting for Guitar Podcast with Bonnie Baker, here.

Mike Meiers: When I look at all the things you’ve done, the one thing that strikes me constantly... 'cause I could just go through your website and catalogue and songs that you have, and I can see Platinum two times, number one single...You are by far the sweetest most grounded person I’ve ever come across when it comes to that. We’ve talked before, and you get a vibe of someone in those first moments when you talk to someone, and I felt like I’ve known you for so long–– it struck me how warm and just how very open you are. That also comes through on your songs. Do you feel like that connection between your writing and just who you are is so intertwined?

Bonnie Baker: Wow that’s an incredible statement and question, and I’m digesting as we speak. You know, my goal when I entered this world when creating these songs was to have longevity. I wanted to span several decades; I had in mind four. So I tried to come at this with a classic approach to lyric and melody writing. If you have a hit in 2008 that in 2023, it could still be relevant...I just always had that in my brain of trying to speak in a way that had kind of a classic approach to it.

Now don’t get me wrong, there are some hits on the radio that are very 2020 and I love them, so I appreciate the question and I want to just say that the amount of awards or you know, I had a goal to sell 10 million records, and recently passed that mark, and I’m very humbled by people buying albums or people downloading an album–– because we work so hard on this music in our little spaces, and then to have people listen and respond to it, it’s probably the greatest achievement I could ever have! I love writing, I love working with artists, I love sussing out what messaging we want to work on, but when that message lands, it really is my greatest joy.

MM: There is so much in that entire statement you’ve made. With that idea of longevity, I want this to not just be a current thing, I want this to speak decade after decade,...were you always in that mindset when you first thought about writing songs? What was your introduction to that process or this idea of expression?

BB: It’s interesting you ask, because I have a degree in english and I started my masters degree in creative writing. I wanted to get a masters degree and I studied fiction. Many of my absolute heroes were people like Anne Tyler who has written just an incredible body of work! And she’s not the flashiest, most well-known author in the world, and she’s literally been writing books for thirty years. I find her newest bookspeaks to me as well as her first book.

I think I was responding to the authors on a fiction level, that really spoke to me, and then it just kind of parlayed itself into writing songs... but then also I had many heroes as songwriters- Carole King being one...Tapestry was just a huge part of my growth as a writer, and I can go down the roads of people that weren’t necessarily my peers or people that were current when I found them, but I still found so many things to listen to in their work that spoke to me as an 8 year or as a 10 year old.

MM: What I love about that... you said it spoke to you. Cause sometimes I feel like songwriters are caught up in the game of, “Okay, so what’s charting on the radio–– that needs to be my thing” and they absorb themselves… and they are trying to pull from something to get inspired  and they may be pulling from the wrong well? You know, it might just not be the thing that ignites that fire, or whatever metaphor you choose to use... so hearing things that speaks to you, that’s  the thing that ignites your creativity, or if you’re looking for that longevity, you need to be on the search for that, and not for something that’s necessarily the number one, because it has all of the cool references on instagram...

My insecurities make me feel like no one wants to hear my story, so therefore we go outside of ourselves, we want to live this Instagram life that looks sparkly and shiny, and exciting and everything, and really, I feel called to dig into the internal life of myself because the childhood, the stories, the trauma, the challenges, and the victories that I have, very well may speak to someone else who’s having their own challenges.

MM: I remember, I was growing up going to some punk shows standing there going, “Yeah!”–– loving the atmosphere. Fast forward, I was going to see Jason Isbell and James McMurtry, and I was sitting down. You’re right, eyes closed, listening intently to lyrics and going “Ugh, this is fucking awesome”...Before, it was the loud, “fuck yeah!!” ... and this was the quiet, inner self…”this is so nice”. And I looked around and I could see people absorbing it...Which...Both of those are fine!

BB: Right, there’s value in both of those! I have a 17 year old who will go to..he can’t right now but... he loves to go to these shows that start at 2 a.m. He gets there four hours early so he can be on the front road. And those artists speak to him. He comes home fired up about creativity, and songs, and music, and life and friendship and all of that, so voices can be louder or softer. There’s no genre that I’m putting on this. It’s like, we have great artists out in the world in every genre that speak to us and I will say some of the artists that he follows, they have created communities that are strong with integrity.

MM: The ideas of art and expression and the meanings behind it and what it says...

That stands the test of time.

BB: Exactly and that's what gets me up every day to walk down to my studio office that I have and get to work!

MM: So when you came to Nashville in the early 90’s, what was that experience like for you? Because I’d say coming into writing, from the perspective of a female into that world, especially in the country, would seem very dude centric...

Find out who helped jumpstart her career in Nashville and in her later years, how she was able to allow herself to grow from other avenues and rediscover songwriting as a true passion.

Continue listening to the full episode with Bonnie, and weekly podcast episodes on Apple Podcasts and Spotify Podcasts

Also, check out this blog post on networking. You might be one person away from meeting someone like Bonnie did in the '90s before her biggest hits.