Active Listening for the Unconvinced 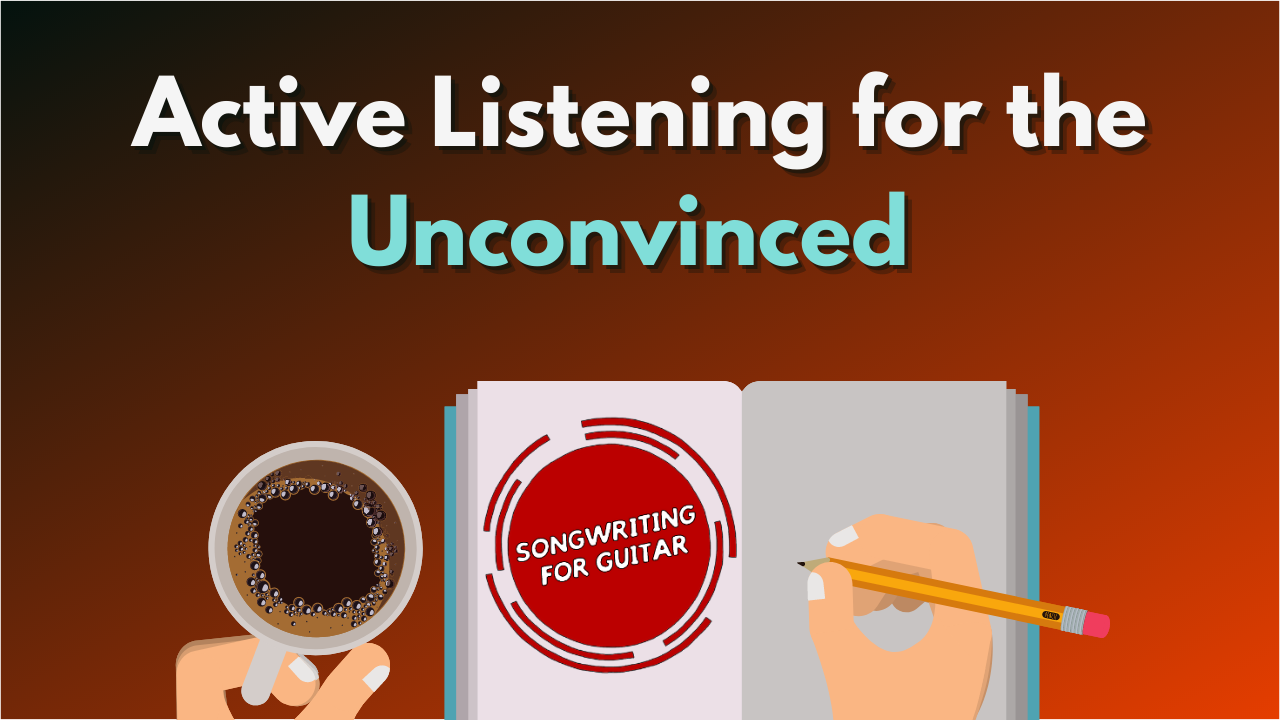 You might have heard me talk about active listening because I'm a huge advocate for it as a songwriting guitar  coach. But why is this so important? What are the benefits? Do you really need to do this consistently?

If you’re thinking, “active listening doesn’t really matter”, or “I want to figure my songs out on my own”, as a coach and someone who didn’t really “get it” for a while, I’m shouting from the rooftops, “IT MATTERS”! If you don’t realize this, you’re basically trying to reinvent the wheel each time you sit down to write a song, or you're getting stuck in the same old patterns over and over.

Do you think anyone who’s gotten anywhere new, just decided to start from scratch? No, they had a leg up and learned from people before them (mistakes and all). Why would it be any different in music?

If you’re still reading, I know you’re someone who wants to jumpstart their writing. Adopting the active listening mindset will help you enormously.

Regardless of who or what you're trying to write for, (yourself, other artists, Film and TV etc…) active listening is for every musician who wants to stand out.

Stuck in the past

Traditionally, you might think that you need to take lessons and things of that nature to advance your skills. You might go to a great musician who trained at a music school, and they’re going to teach you from the approach that they learned. Don’t get me wrong, they would be amazing, and deliver you what you paid for, but unlikely from the approach of a songwriter.

What you need is someone who can shatter your views a little, someone who understands what you’re trying to do. The best is if you find someone who has the perspective of who you want to become, otherwise, you’re going to get directions that will have you concentrating on the wrong things and wasting a lot of your time.

It’s the same with the music that you naturally seek. When listening, you’re going to seek out music that makes you feel comfortable, music that relates to your tribe.

Or sometimes, it comes down to pride. Some feel more years in the industry equates being farther down the path with more knowledge - but it’s a trickster - that mindset setting in is a good indicator that you’re starting to get a little clouded.

The misgiving is, you end up thinking that you’re listening to new and different things all the time, but you really just listened to the new remastered version of this one thing from the 70’s, or you were watching a clip of an oldies band that was just playing live in Kansas City, which was great, but it’s not new.

We seek out people and music which is in line with our point of view, and what we're finding is a pat on the back and assurance.

The validation of listening to the same old, same old, reminds me of when Richard Rohr talks about religion. Subscribing to more of the same, ends up aligning you with the things, not that you’re for,  but about what you’re united against.

Seeking out your same tribe in music is similar. When you find people who dig their heels in, you’ll find out really quickly what they're against.

If you listen to what you enjoy, please don’t get me wrong, there is a time and place for that, but don’t mix that up with active listening for research and learning. You’ve got to do this if you want to fill your creative well, so when you sit down to write, co-write or produce, you’re ready with a bag of tricks.

The Creative Well and How to Start Filling it Up!

Your creative well is essentially the idea of hooks, riffs, chord progressions, melodies; if you’re doing production, it’s all those tiny nuances that make it feel less like a work tape and more like a production.

This is where a lot of people say okay, okay I get it, I need to start listening but,  “there’s no good music, I don’t know where to start etc…”

It’s kind of a cop out! There are so many places to start.

As you're listening to these already researched playlists, you’re going to want to listen to it over and over. You don’t want to do just one or two passes.

Think of some of your favorite songs that you know inside and out... if you truly want to understand a song, you have to absorb it, and you have to listen to it more than once. That means throwing it into your playlist and keeping it going and listening to it for a week or two. The idea is to do this to a point that you understand the songs, and then freshen up your list!

If you engage in a quick listen, you’re barely scraping the surface. You need to dive in to really absorb it and see what’s happening- even in genres you might not be crazy about. Again, you don’t have to be a diehard fan, but you can appreciate it and find the gold.

You might even surprise yourself when you disassemble it.

The first time I heard “Hand Clap” by Fitz and the Tantrums, it was really exciting! When I figured it out on guitar, I realized he’s just on one note, but here I am jumping around, because when he gets to the chorus it’s a lot more  impactful. Having moments like that is when you realize how much you miss, without actively listening.

As a producer, I like to see productions evolve. There are unique attributes of the artist, or of the producer who add their spin and taste,  but there are also common things that you’ll listen to in songs and see a pattern happening.

As a songwriter, it’s your job to recognize it, respect it and find the patterns. Then, use what you’ve learned as a guardrail so you can guide your writing and be better on target.

There’s another psychological part of getting into the active listening mindset. Some people are dead set against listening to anything new. Ask yourself if you have a tiny bit of this musical prejudice as well.

I’ve heard things like, ”Everything was good at this one certain period of time” or, “This music is awesome and everything else is shit”, or I’ll hear, “I’m good where I am.”

If this is partly you, I’d urge you to think about it like this… If the doctor learns a new system that is guaranteed to save a patient's life, and guaranteed to be a shorter surgery time, the surgeon wouldn’t say, “No no no, I’m good, I like it when there’s little bit of risk, and when I don’t know if a patient is going to make it! or “I like spending the extra hour or two on this”.

No, they are always looking to advance their skills and guarantee success. Obviously songwriting isn’t as high pressure as surgery, but if this is what you want to do, take the lead from people who are actually in life and death situations. If we know this is going to help our songwriting,  it’s a part of our job description as a songwriter.

I get it, we have preconceived notions about certain genres and styles, and that’s based on; how we grew up, what we listened to, and what people told us.

Everyone has adapted, or lived into these notions for so long, that they started to believe it themselves.

You can learn from anything

Music is not something you need to center around hating. Music is simply made up of perspectives and you can appreciate it without being a die hard fan.

Think of it like going to a museum and seeing historical art.

Art at a museum is a looking glass into different periods of time. You can respect it and you can take what you see and start to use it for your own creative inspiration, and that’s the whole point.

I recently saw a clip of  Pharrel talking to Dave Grhol about his drumming style, and Pharrell goes, “you’re a great drummer!” but Dave replies that he’s the “most basic drummer”. He goes on to tell a story about Tony Thompson an incredibly influential drummer in disco and says that he stole all of that. In this clip, they played Nevermind next to a Disco song by The Gap, proving Dave’s point. One day Dave said he even met Tony Thompson at a BBQ at Dave’s house where he got to say, “thank you, I’ve been ripping you off for years”. What was Tony’s response? “I know”.

That’s the thing- you can take from other people, even if it’s a different genre,  and you can add it into what you’re doing. When listening to Pop, even if you’re not a fan, you can absorb some great melodies or hooks from it, and bring elements into your Folk Americana writes.

What Tony Thompson gave to Disco, David Ghrol extrapolated it and gave it to grunge.

It all comes down to the fact that you need to listen to new things and absorb them in a different way so everything is constantly staying fresh!

If you enjoy this blog, check out Songwriting for Guitar's weekly podcast on Apple Podcast and Spotify podcasts.